Once a year, Jackson Hole in Wyoming hosts the world’s central bankers. Under the craggy ranges of the Teton Mountain Range, we met last weekend to discuss how well monetary and financial policies have worked to save the world from the worst of the crisis, having just been through the biggest economic and financial shock in 80 years. It now looks like we (and the world) have seen the worst, and we are beginning a recovery that many believe will be slow and fragile.

What lessons can be taken from this experience? How well did our policies work? What lies ahead? END_OF_DOCUMENT_TOKEN_TO_BE_REPLACED

Culture I feel is something too often overlooked with respect to many global factors, and this is a case in point. The uneasy cultural transformation or intolerance of Europe over an expanding population of Muslims seems to murmur Samuel Huntington’s clash of civilizations. The point being that a globalising world equates to integration among overlapping cultures which sometimes do not gel -but more than that, whose values potentially cannot exist in the same legal or political system.  This poses many questions. How should European governments respond? And what are the economic and political impacts these communities are having on their host countries? Moreover, what does this mean for future relations between the East and Europe?

IN APRIL 1968 Enoch Powell, a Tory cabinet minister, destroyed his political career when he denounced mass immigration as a disaster (“like the Roman”, he said, “I seem to see ‘the river Tiber foaming with much blood’”). Today Powell’s arguments, if not his classical allusions, are becoming dangerously mainstream.

Christopher Caldwell is an American journalist who writes for the liberal Financial Times as well as the conservative Weekly Standard. He has spent the past decade studying European immigration, travelling widely and reading voraciously in an impressive variety of languages. His controversial new book repeatedly echoes Powell’s warnings all those years ago. END_OF_DOCUMENT_TOKEN_TO_BE_REPLACED

A related article originally published on the Financial Times can be found here:
http://presseurop.eu/content/article/78391-iceland-squeezed-lemon

EUOBSERVER / COMMENT – In the wake of the failure of the Icelandic banks Messrs Brown, Barroso and Strauss-Kahn prove that they have understood nothing.

From G8 to G20, many heads of state and government seem to delight in repeating that nothing will ever be the same again. The world is changing, to the point of being turned on its head by the crisis; the way we think and act in terms of financial regulation, international relations and development aid must therefore, according to them, change too. However, numerous examples contradict all this big talk.

END_OF_DOCUMENT_TOKEN_TO_BE_REPLACED

NZ expat and friend of mine just wrote this for the Australian blog  – Thanks Tim!

AS EVEN the most ardent republican would acknowledge, Queen Elizabeth is not one to make flippant comments about grave matters of public policy. So when, capturing perfectly the mood of public exasperation, she asked an economist why his profession had not seen the crisis coming, it became a serious matter for the British Establishment. The response, which came at the end of July in the form of a letter to Her Majesty from that august institution, the British Academy, suggested that everyone had been doing their individual jobs correctly, but as a group economists had missed the big picture of a “series of interconnected imbalances.” If economists were guilty of anything, the letter suggested, it was “a failure of the collective imagination of many bright people… to understand the risks of the system as a whole.” END_OF_DOCUMENT_TOKEN_TO_BE_REPLACED 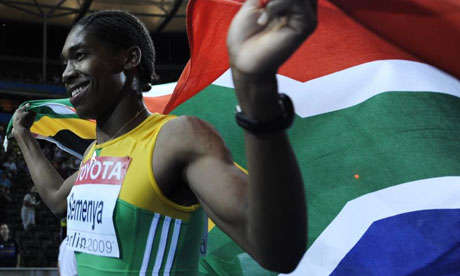 Everyone, it seems, is talking about Caster Semenya, the 18-year-old South African who has had to submit to gender verification tests after posting some excellent 800m times this summer, among them last night’s gold medal-winning 1 minute 55 seconds in Berlin. Unfortunately not everyone has mustered the sensitivity such topics demand: the Sun’s “800m and two veg” headline is crass; the announcement by the International Association of Athletics Federations (IAAF) a matter of hours before yesterday’s final was rather more surprisingly tactless. END_OF_DOCUMENT_TOKEN_TO_BE_REPLACED

The Current Crisis vs. The Great Depression
A video introduction of our presentation for the Politics 341 course, convened by Dr. Jacqui True at The University of Auckland. This presentation addressed the question;
“The current global financial recession represents a greater threat to the stability of capitalism than the 1930s Great Depression. Debate this statement.”

Click on here to read the Letter (PDF format)

“Mathematical technique should not dominate real-world substance.” During a visit to the London School of Economics in November 2008, the Queen asked why few economists had foreseen the credit crunch. Dated 22 July 2009, she received an answer from Professors Tim Besley and Peter Hennessy. This was widely quoted in the British press. Ten leading British economists – including academics from top universities, three Academicians of the Academy of Social Sciences, academic journal editors, a former member of the Monopolies and Mergers Commission and the Chief Economic Advisor the Greater London Authority – have responded by writing their own response to the Queen. They note that the letter by Professors Besley and Hennessy fails to consider any deficiency in the training of economists themselves. Following similar complaints by Nobel Laureates Ronald Coase, Wassily Leontief and Milton Friedman, the ten economists argue that economists has become largely transformed into a branch of applied mathematics, with little contact with the real world. END_OF_DOCUMENT_TOKEN_TO_BE_REPLACED

Deputy Prime Minister of the UK, Harriet Harman thinks so. Check out the article on Norway’s gender quotas on corporate boards and the evidence that boards/companies with greater gender balance at the decision-making top do better than those with leadership dominated by men.

LONDON – Britain’s Deputy Prime Minister, Harriet Harman, has laid the blame for the global financial crisis on the male domination of top jobs in banks.

The deputy Labour Party leader suggested that the presence of more women in the boardrooms of major financial institutions could have eased the impact of the credit crunch.

Harman, who is in charge of the day-to-day running of the Government while Prime Minister Gordon Brown is on holiday, was defending her call for one of Labour’s top two jobs to be filled by a woman.

Asked whether the turmoil would have been avoided if more women were in senior positions, she referred to the United States investment bank whose collapse triggered the financial meltdown.

“Somebody did say … that if it had been Lehman Sisters, rather than Lehman Brothers, then there may not have been as much,” she said.

Although she stressed that she did not make the remark herself, she made it clear she agreed with the sentiment.

Just five of the 61 board places in Britain’s “big four” banks are occupied by women, with the boards at Barclays and Royal Bank of Scotland entirely male. END_OF_DOCUMENT_TOKEN_TO_BE_REPLACED

Fareed Zakaria thinks capitalism is being reinvented and invigorated with the global recession but he thinks we face a moral crisis as well as a crisis of globalisation. What do you think? How has the economic recession affected you? Are you happy with the current economic system or are you ready for some alternatives?

The Capitalist Manifesto: Greed Is Good
(To a point)
By Fareed Zakaria | NEWSWEEK

A specter is haunting the world—the return of capitalism. Over the past six months, politicians, businessmen and pundits have been convinced that we are in the midst of a crisis of capitalism that will require a massive transformation and years of pain to fix. Nothing will ever be the same again. “Another ideological god has failed,” the dean of financial commentators, Martin Wolf, wrote in the Financial Times. Companies will “fundamentally reset” the way they work, said the CEO of General Electric, Jeffrey Immelt. “Capitalism will be different,” said Treasury Secretary Timothy Geithner.

No economic system ever remains unchanged, of course, and certainly not after a deep financial collapse and a broad global recession. But over the past few months, even though we’ve had an imperfect stimulus package, nationalized no banks and undergone no grand reinvention of capitalism, the sense of panic seems to be easing. Perhaps this is a mirage—or perhaps the measures taken by states around the world, chiefly the U.S. government, have restored normalcy. Every expert has a critique of specific policies, but over time we might see that faced with the decision to underreact or overreact, most governments chose the latter. That choice might produce new problems in due course—a topic for another essay—but it appears to have averted a systemic breakdown. END_OF_DOCUMENT_TOKEN_TO_BE_REPLACED